Summarise the information by selecting and reporting the main features, and make comparisons where relevant. 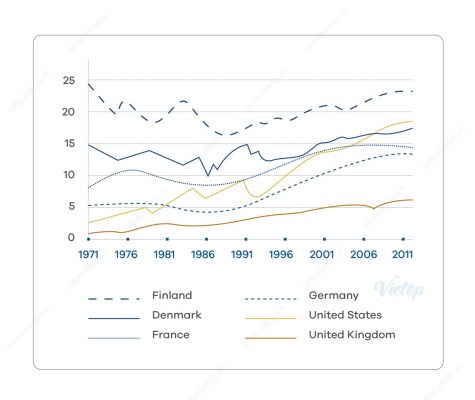 The line graph describes the usage of renewable energy in 6 countries over a 40-year period starting from 1971.

Roughly speaking, renewable energy gained in popularity among all examined nations. While the rate in Finland remained the largest, this kind of energy was least used in the UK.

Looking at the graphs in more detail, 25% of renewable energy was consumed in Finland, being the most significant figure of the whole chart. This figure went through ups and downs before dropping to its bottom at roughly 16% between 1986 and 1991. The use of this energy in Finland then gradually increased until it bounced back to its starting point of 25% in 2011. The figures of Denmark and France followed almost identical patterns, reaching their lowest point in 1986 before rising gradually until the end of the surveyed period.

With regards to the other nations, the most significant growth was seen in the use of renewable energy in the United States. Starting at merely 3%, its figure overtook that of Germany and France and reached 18% at the end. As for the remaining two nations, Germany and the United Kingdom, their figures remained the lowest over the period.